Paris was wonderful, catching up with Charlie Tacorante my friend from growing up in Miami. His wife Chantal and her cousin Anna joined us for exploring the city. I returned to Keygene in Wageningen, did a bit more work related to microRNA and then returned to the States. First stop was Chicago to present some of my work on personal genomics at a conference, and then back to DC to vote.


JC invited me to watch the returns near the whitehouse and when McCain made his concession speech we took to the streets to celebrate. We started off in front of the whitehouse and when the carnival like enthusiasm was just too much for the moment, we walked to the Lincoln Memorial which was more powerful and serene than ever. I can assure you Abe Lincoln was smiling. This is going to be one of my fondest memories of DC, so its particularly well timed. 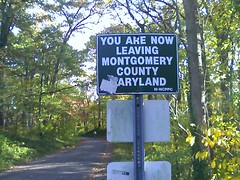 I've given notice on my apartment and I'll move out shortly after Thanksgiving. I'm buying a one way ticket to Cambodia where I hope to spend a few months teaching computers. I've done this sort of thing before but this is my first chance to do it with an olpc, a laptop computer designed for children in developing countries.

I've previously spent several months volunteering at a school in thailand which serves refugees from Burma. I fix hardware, cleanup the spyware, and where possible I teach. On my last trip I even brought along seven older laptops donated by friends. 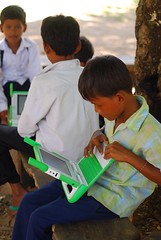 Nicholas and Elaine Negroponte have been doing similar work since 2000. They were impressed by the results of giving laptops to kids, so much so, that they're trying to do it on a MUCH bigger scale.

My last visit to Thailand was 2 years ago, before the olpc was yet a reality. During that time I met megabroad though her work at SAW school (home of Jack Zany). Via Facebook I learned that she has recently moved to Cambodia to work at the Negroponte's original school.

Like a lot of self professed geeks, the olpc appeals to me for technical reasons. It's a ruggedised low power Linux machine with an innovative screen which works well in direct sunlight. It has gigabyte of flash memory for storage with no fan and no hard drive -- no moving internal parts that can fail. Its software is written mostly in Python and C, both languages I'm very familiar with. While the kids might think they have a toy in their hands, in many ways it exactly the same sort of machine which I use everyday for big science. I want to help unlock its potential. 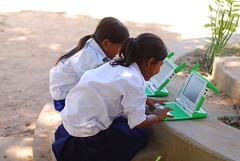 The same is true for the students I've met. They live in a post internet world, and just because your family lives on $1 per day in South East Asia doesn't mean mean you can't attend an MIT lecture during lunch.

On Monday Nov 17th you can buy an olpc at http://amazon.com/xo for $400. This actually buys 2 machines one machine is sent to you, and you've just bought an extra one which is sent to a school in a developing country. Don't think of this as a replacement for your current laptop. If that's what you have in mind you will be disappointed. But for what it is trying to achieve it is a remarkable device. 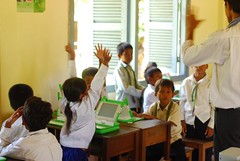 What can I really achieve? I don't know. But previous trips felt like they did accomplish something. These olpcs are still very new technology and they have their fair share of bugs to work out. I think I have the right mix of skills to be useful. I hope that being in the field will allow me to find ways to help. I've got lots of ideas, but I think on the ground reality needs to dictate how I spend the little time I have.

Almost half of my colleagues at BioTeam.net also own olpc machines, and they've been very supportive of my decision, so I will have a job waiting for me when this is over. I expect that will be in mid March when I expect to return to the Netherlands for meetings with Keygene. Afterwards, will I come back to the DC? With no lease and no return ticket anything is possible.
Collapse