Reaksmy, Preah Vihear, Cambodia is home to Cambodia PRIDE (Providing Rural Innovative Digital Education). Elaine and Nicholas Negroponte founded this school in 1999, and Elaine is living in Cambodia for over half of most years. Before there was an xo, the elementary school was providing classroom laptops. Those original machines were Panasonic Toughbooks, many of which are still in daily use. At present there are ~250 xos here, and they can be seen as a response to the challenges of this environment. However the xo is still young, and it is important to measure the results, and look for places where further improvements are needed.

To date only 2 machines have been seriously damaged. One screen was cracked when the machine was dropped, the other was damaged when washed with water. Other students seem to have taken this lesson to heart, and it seems unlikely that mistake will be made twice. The Sugar interface makes it surprisingly easy to permanently remove activities from the xo, which can create some extra work. 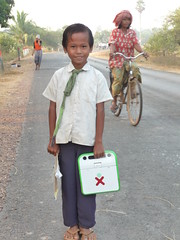 As others have reported, the most common problem is the 'jumpy cursor'. Interestingly there has been much experimentation and some success putting scotch tape over the trackpad. Perhaps other sites will find this useful until the next software update. Long term this needs to be solved at the software level, as do several networking issues. In particular I'd hoped to be able to provide remote support, via an ssh tunnel into the xo. However even with a usb to ethernet dongle I'm still unable to have the machine simultaneously use mesh and internet. I hope to hear from anyone with technical experience related to xo networking who can help me to learn more about this topic.

Primary school students have a computer class 1 hour per day 5 days a week. On my first day here I watched Scratch based multimedia presentations made by each student in the 6th grade class (ages 13-15). Topics included "how we cook rice in my home," "how to grow a vegetable garden," "how to play baseball". These were similar to the powerpoint presentations I've watched at scientific conferences and corporate boardrooms, and in many cases these were far better. The project had begun several days earlier with some group storyboarding, then students used the xo to take pictures at home. Lastly they recorded narration which provided an opportunity for students who aren't as comfortable with english to rerecord and edit until they were happy with results. 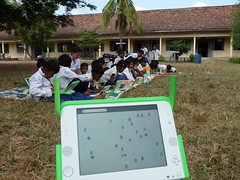 Later in the day some of the younger students were taken outside to use 'Paint' and draw the buildings and nature around them. During previous similar teaching experiences I've learned to appreciate how important drawing programs are to allow students to learn cursor control, cut/copy/paste, save & exit. The ability to take the xo outside, into direct sunlight opens up their creativity in a way that does not happen when everyone is looking at the same four walls.

Historically, education in South East Asia is largely rote memorization. This is far from the olpc model which encourages individual creativity and collaboration, but establishing new habits isn't easy or quick. Western teachers have told me that they often need to show an example, then quickly erase it, to avoid having students copy it verbatim. Having a girl raise her hand in the middle of class and say "Teacher, I have a question" is the sort of too rare moment where you realize real progress is being made.

Permission to reuse this text in whole or in part is automatically granted to any website with 'olpc' in the domain name if a link to http://cariaso.livejournal.com/38040.html is provided
Collapse