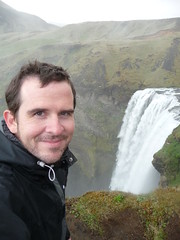 Iceland was beautiful. I drove a loop around the whole country. A bit rushed, but it gave me the chance to see some less visited sites and explore a true wilderness. Iceland's scenery is amazing because it is so raw. You look at cliffs and think, that can't be real it wouldn't hold on. Pause a little longer, a you will see that you are right, as grains of black sand fall away. 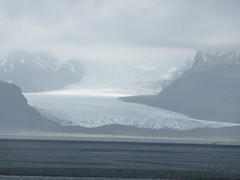 The photo above is taken from the road at this spot in front of the Vatnajökull. This spot, more than any other, triggered a phrase that I kept repeating during the rest of my visit - "Iceland: Nature's most beautiful work-in-progress". It gave the sensation of standing below a dam which has broken. A wall of water rushes at you, and this is that last sight moments before the wall hits you. But this wall of white water is frozen, and moving at truly glacial speeds.

I have a suspicion that this volcano is not mere chance. The Icelanders are a hardy, proud, and slightly crazy bunch. They've been left holding MUCH MORE than their fair share of the recent global credit crisis. When it all fell apart, they were surprised how little support they were given by the rest of Europe. Buying power is relative, and perhaps inflicting some pain on europe really does lessen the Icelandic debt burden. I suspect in exchange for €50,000 per Icelandic resident they can call off the volcano by tomorrow.


I'm disappointed to not be at the conference. Best wishes to the friends I will not meet.
Collapse