1 hour ago, the Netherlands advanced to the final of the FIFA world cup. That's "the superbowl of soccer" to those of you in the USA. They've not been here since 1978, and have never won. As we speak the country is mobilizing from pleasantly surprised at defeating powerhouse Brazil, to full tilt shock and awe. The Hoogstraat below my window is coming alive at midnight and it's a beautiful thing to watch.

Tomorrow will decide if the final game is against
- Spain: William of Orange's defeat of the Spanish in ~1570 ensured that the color orange would be a permanent part of the dutch team uniform

- Germany: WW2 war ended in 1945 about a 3 minute walk from my home. Historic animosity run surprisingly deep due to a mix of family level WW2 tensions and a historically stronger football team 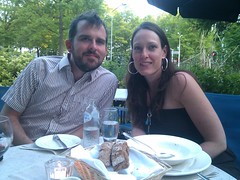 In that match, my loyalties are biased by the Berliner named Gaby I've been very happily dating for months. The photos speak for her beauty, but do not capture that she is a laboratory scientist who is comfortable booting a linux laptop to debug a classifier she wrote in C code, or the myriad more personal ways we connect.

Despite her diehard loyalties, on Sunday I'm pulling for Oranje. But it doesn't much matter since I'll be on a train from Paris during the final game. Tomorrow I'm off to EuroSciPy.

Today I learned 2 other things I'm proud enough to share:

While Wageningen is a very international city and English is quite sufficient, I'm trying to learn the Dutch language. Today I received notice that I've passed Dutch Level 2, and will be able to start Level 3 in the fall.

Despite my last blog post, I was able to make it to BioIT World in time for my talk. I got 2 perfect 4.0s on my presentation for content and delivery.

And life is grand
And I will say this at the risk of falling from favor
With those of you who have appointed yourselves
To expect us to say something darker
And love is real
And though I realize this is not a deep observation
To those of you who find it necessary
To conceal love or obscure it, as is the fashion

Lastly, while now no longer fresh news. I saw Rage Against the Machine play in Arnhem a few weeks ago. Jane's Addiction was an opening act, as was Gogol Bordello. The last time I saw RATM I was half my age, and it made the sort of impression on me that I can honestly say shaped my life for a few years that followed. They recaptured all of that, and built a time machine on stage.

For all of this, I am grateful to the kindness of the universe.
Collapse