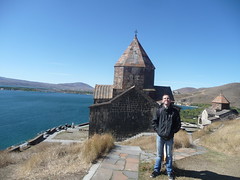 I decided to explore solo for a few days. For me this meant taking a series of Marshrutkas to Lake Sevan and it's centerpiece the Sevanavank monastary.

The first day was rainy, and I spent about 20 minutes walking from the dropoff point to my hotel. I confess, this was a Best Western, which meant western prices in exchange for (not actually working) wifi. The staff spoke perfect english, but where is the fun in that. The weather did create some beautiful skies as you can see to the right. The other pleasant surprise was an email from an old friend. Josh Vroman and I went to kindergarden together, and several other times along the way we had classes, or cub scouts together. I don't think I've seen him since I was about 12, but here he was via email. The storm had helped to clear the air, and the next day I was rewarded with very clear blue skies, and visibility to the snow capped mountains which ring the lake. As usual, the photos show well, but the experience was what I enjoyed. The picture at left was taken by an Iranian, and in the USA we don't meet so many of them. The ones we do meet usually identify as Persians instead. He spoke quite a bit of English, and asked where I was from. The answer to that question is always a bit complicated given my semi-nomadic life, but since so many Armenians have a connection to Glendale, California I've learned to give "Born in LA" as a response. His reaction was immediate --- "Ah, Arnold Schwartenegger". I laughed, and continued to marvel at what a positive and global icon that man has become. There was no need to point out that Jerry Brown was the new Govinator instead. 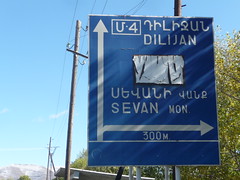 By early afternoon I decided to journey onward to the Armenian Switzerland, Dilijan (2), about an hour away. It's hard to believe that an hours drive, could so radically change the scenery, but click on the picture at right and you won't have to take my word for it.

. I stayed at Dili Villa a fantastic house maintained by the currator of a really impressive museum. The house is equally filled with paintings, but at the museum I was given a tour of the not-yet-opened basement exhibit with more of the history of the area. This wasn't your usual, 'look but don't touch' experience, instead I was invited to flip through old photos, handle a bronze age axe head, and even pose with a few weapons. 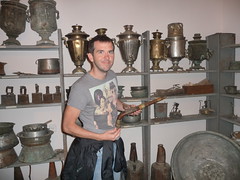 Since then I've returned to Yerevan. Last night we ate at a fish restaurant where you pick your sturgeon and trout from one of the pools, then watch while they bash it's brains in. Fresh fish has to come from somewhere... I've also bought tickets for an upcoming segment of the trip. In a few days I'll move on to Georgia. On Oct 15th I fly through Kazhakstan, en route to Kuala Lumpur. I've got a few ideas what may come next, but writing them down here seems the best way to ensure the plans change. 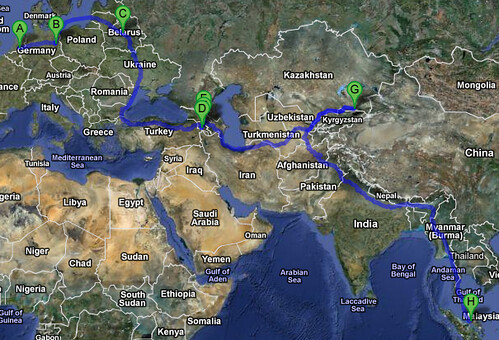 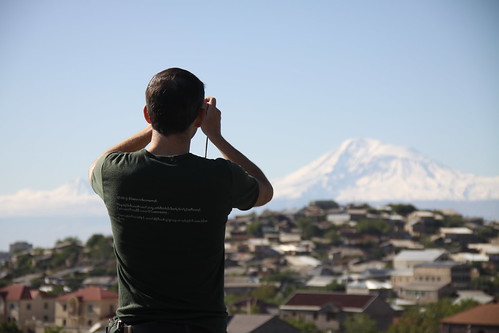 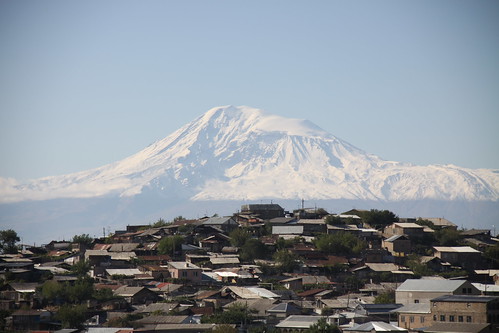