Tbilisi to Zugdidi in a marshrutka should probably cost 10 Lari, but I was paying 20 = $17 for the 5 hour ride. On the upside, I had the backseat, and had it alone for the second half of the trip. This meant I was able to lay down and get some actual sleep. During a flat tire, I talked with David who works in a Tbilisi call center. Importantly, he taught me 'Thank You' as 'mad-loh-bah' and the names of a few regional foods.

From Zugdidi I'd hoped to take another Marshrutka, but with no apparent options agreed to a 'taxi', which was a green Mercedes-Benz 4x4 jeep. My driver didn't speak any english, so he called his brother, who showed up after about 20 minutes in a black Mercedes-Benz SUV with a priest riding shotgun. Via the driver's German and my little Dutch, he translated a few key details of the planned route. I finished our talk with 'mad-loh-bah' and this seemed to be appreciated. The drive begins, but ends after 2 minutes. The priest comes over, and swaps cars with me, with the apparent idea that my little english+dutch will do better in this car. There is family of 4 in the backseat. The grandmother Katarina looks about 45, her 25 year old son has a name I never did quite get the but it seemed to be somewhere between Zorro and Sauron so I'll call him Zorron. also squeezed in, his sister Salomeh and her daughter (perhaps age 7) is named Angela. Salomeh actually speaks quite good english, but was too shy to mention that during the 1st hour of the trip. The driver is Rostom Girguliani (geer-goo-lee-ahn-nee).

I'm now being driven shotgun in a black Mercedes-Benz SUV along the river. Both cars stop for the local dish, a cheese filled bread Khachapuri and it's meat filled equivalent. Zorron climbs an apple tree, and knocks a few loose. We grab handfulls, while a big pig and small dog fight over what we've missed. We're outside a restaurant, overlooking the Inguri Dam . The accordion player at the resturant over the lake comes out to serenade us (and the priest (Dmitry)) before we have 2 kinds (red + white) of homebrew wine from gas cans. We drive on a gorgeous and twisty 1 year old road towards the home of the other driver, just to the west of Mestia. Rostom is now acting as if we're new best friends, and offering a tour of my final destination, Ushguli, a ride back to the capital, and places to stay all for no charge. I'm a bit skeptical, but I've got nothing else and perhaps this really is just wonderful hospitality. During dinner the men sit and eat, while the women serve us and stay out of the way. They all drink drink WAY HARDER than I can, while serving breads, bread+cheese, bread+meat, cucumber, salt+pepper, tomatos, fried chicken. The oldest guy is Galaction 80 years. Tomorrow we will spend 1 day in Ushgali for photos. I would have preferred 24h there, to allow photos at sunrise and sunset, but I'm literally unable to say no, since it would be 24h before I learned that word ("Ara") and I'm not fully certain of what little I think I understand.


After a satisfying dinner, mixed with many rounds of drinking the homebrew ChaCha. I turn into bed and write a bit of this journal, before the alcohol purges the memories. Words won't do the trip to Ushguli justice. 3D high def IMAX also wouldn't. You'll need to go there yourself, but there seems to be no great rush, time is frozen here from roughly the year 1200. Until you make the journey, take a look at these photos to help you prepare. 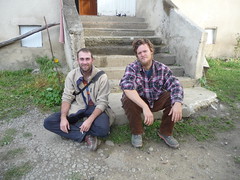 On the way back from Ushguli we picked up 2 hitchhikers who crammed themselves between the luggage in the back. Peter is Hungarian, 31 and speaks German well enough to communicate better than I with Rostom. Kenneth is Norwegian, vegetarian, and as tall as the trees he cuts for a living. We speak very little at first, and by the half hour mark have exchanged only 4 sentences. For the 5th sentence they ask how my liver is doing, I laugh as we share an understanding. In the coming 24hours I learn that their previous 3 nights of homestays simply would not take no for an answer, either at dinner (uncountable) or breakfast, which was 5 shots of ChaCha. Father Dmitry was also a bit of a lightweight, and his emphasis on red wine instead of ChaCha had been my savior so far. Peter and Kenneth are truer travelers than I, with Peter on year 3 of travel and a steady budget of $10 a day. You should follow their travel blog at kepesita.org. They'd planned to take the $75 flight out of Mestia in hopes of seeing more of the Caucauses from above, but take up Rostom's offer to join us for the evening at his brother's house and the next day's journey back to Tbilisi. Dinner is similar to the night before, with pleasant additions of beef soup, watermelon, tomato+onion+vinegar salad, and an aubergine+chili tapenade. A few other men from the village join us at dinner, one in particular drinks unbelievably hard and enthusiastically tops off the glasses every 5minutes, mainly so he can refill his own. Afterwards Peter and Kenneth take the beds I'd used the previous night, while my sleeping bag gets the first use of the trip. To pass the time while drinking enough water that tomorrow morning won't be too painful, we talk in the darkness, and they show a a genuine interest in and understanding of my genetics work. Or maybe it was the ChaCha.

At dinner Father Dmitry had made it clear he didn't want to wake at the crack of dawn today, so at about 8:30 we wander downstairs and are promptly put to work by the brother cleaning out the barn/garage. Mainly this means moving the woodpile from A to B in what seems like confused busy work. All the while we can hear Father Dmitry inside, wearing full vestments, as he blesses each room, and the icons which adorn them. After an hour a few other faces from the previous dinner have returned to join us for breakfast. 80% of the meal is lastnight's leftovers, but some oatmeal and other other items are new. The table is set, with candles attached to the plastic coke bottles filled with ChaCha. After a few ceremonial minutes Dmitry takes the candles away (without setting his beard on fire) and the breakfast shifts into the hard drinking phase. We three westerners exchange terrified looks, but give it our best shots. The same over-enthusiastic booze hound pours each glass, the speeches begin, and we prepare for 'the burn'. Peter is the first to jump in, and shouts with a pleasant surprise "it's water", we laugh, and throw this round back with gusto. Our hosts discover their error, and with a genuine horror toss the water from their glasses out the window, then remove the incorrect bottle from the table. This is the funniest thing I've seen in a decade, and Peter and Kenneth share my delight. We celebrate like condemned men who have a power failure in the moment before electrocution. We know our fate is still sealed, but the gods have offered the best comfort they can.

With the correct bottle, we resume. Peter manages better than I, and Kenneth better still. His viking ancestors would be proud, but still no match for these men from Svaneti. I point out "we're doing shots with the driver. again." and later learn they found this worthy of a tweet. It was the only time I lost any respect for these two, yet they have plenty to spare. The drive was pleasantly uneventful. We stopped only twice for more Khachapuri and ChaCha. I finally managed to get Rostom to take 50 Lari during one of the meals, but this seems to have done more harm then good. Later during a refueling, he asked Peter for something which sounded close to "samen betalen" and seemed to be german for "you pay half?". He agreed, and got out to do so. But when we drove away explained he'd just paid the full amount, which was 150 Lari = $90, and was hoping that they would settle up before the trip was done. I knew quite well, that once the money was out of your hands, it was unlikely to come back. In hindsight the obvious solution was for me to offer money and even that up, but somehow with Peter as the one outside of the car, and I having paid about that much just an hour earlier the thought didn't occur until later that night. Instead Peter's attempt when exiting the car was not well received, and I was glad it happened outside the car where I could feign ignorance of the whole affair.

From Rostom's side I'm sure it seemed like a reasonable thing, but for Peter and Kenneth's hitchhiking budget it was a huge impact. I hope to meetup with them again before I leave the city, and try to put things right, but it did happen and I record it here as part of the story. It left me wondering if Rostom's hospitality had an ulterior motive, but he continued to reject my attempts to give him money even the next day. That night he put me up in his Tbilisi apartment, and in the morning rejected my attempts to again hand him cash before I left, with sincere statements about freundschaft. But he was expecting me to stay for more days, and trying to offer me the key to his apartment expecting me to stay until my saturday flight. That is a generous offer, but I travel solo and was not prepared to have anyone control that much of my remaining time. I'm back at a centrally located hostel, and free to come and go, without the need to struggle through 2 broken languages or hurt feelings and confused expectations.
Collapse