After Ushguli I spent a few more days wandering Tbilisi, Georgia. It's a beautiful city, with a high density of sights right by the river and the old town. The slightly decrepit curvy streets, and the balconies above them are filled with real people going about their lives. Old men play dominos, young couples dance a mix of modern and traditional styles at a restaurant, and a young girl does a little graffiti on the steps declaring her love for Justin Bieber. My flight through Almaty, Kazakhstan was as uneventful as you'd imagine, except to note that the air quality was really awful.

Kuala Lumpur is humid, lush and green, reminding me of my first time back in South Florida after moving away. This provides my first taste of street food in a long time, with the fusions of Malay, Chinese, Portugese and Indian which make eating here such a joy. My plan was to head to Indonesia and try some surfing on Nias, but while setting my wakeup alarm I failed to reset my timezone, and missed the flight. 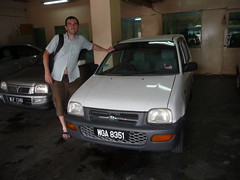 Plan B went from inspiration to realization in about 12hours. When traveling in this part of the world, I've always been at the mercy of busses, trains, and their schedules and routes. Now I've instead bought a car. It's a 1997 Perodua Kancil with 145k km on it. It's almost certain to give me trouble, and with luck a few stories to go with it, but I'm prepared for that. The flight I missed was early monday morning. By 6pm I owned the car, and by midnight I was in a riverside guesthouse in Melacca smelling the salt air of the straights.


Malacca may be familiar to those who's studied Dutch history, with http://en.wikipedia.org/wiki/Christ_Church,_Melaka and http://en.wikipedia.org/wiki/Stadthuys as particularly notable. In the evenings here I often wander on Heeren street, which shares it's name with the road behind my old Wageningen apartment. The walls of the old city are in the same shape as the walls of every dutch city. And in connection with my last stop, the Church here uses old headstones as flooring (apparently this is not disrespectful) and includes one from an Armenian.

I, Jacob, grandson of Shamier, an Armenian of a respectable family whose name I keep, was born in Persia near Inefa, where my parents now forever sleep. Fortune brought me to distant Malacca, which my remains in bondage to keep. Separated from the world on 7th July 1774 A.D. at the age of twenty-nine, my mortal remains were deposited in this spot of the ground which I purchased.