Malacca was historically interesting, but lacked the local interactions I enjoy when traveling. Moving onto Penang, the first thing a local said to me was "chinese girl? vietnamese girl?" and this was not the sort of local interaction I was hoping for. I made the best of my time, which meant sampling the local foods, for which Penang is justifiably famous, and enjoyed every bite. The car got better use, and fewer parking tickets, as I explored at an improptu pace. Monkey beach earned it's name. But when the opportunity to move on came, I took it with no regrets. 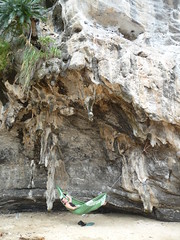 Thailand is a bit cheaper, and I like the food a bit better. (Regrettably it does lack the wonderful indian breads). Cultural stuff can wait so I headed for a beach with a nice vibe. Tonsai lacks the perfect white sands of the panorama above, but at low tide, it's a 10 minute walk away, and the atmosphere is far nicer than that posh end of town. Here reggae bars keep going until the last customers decide to call it a morning. A dreadlocked alaskan named Shane plays drums during a spontaneous and amazing tap dance routine, then later fields guitar requests and sustains the mood while I talk to an Iranian guy and the two pretty girls (Rianne - Dutch, Lucia - Viennese) who are all doing this for the first time. I'm a grizzled old veteran of the road, able to speak some helpful thai, offer wanted band-aids (plasters is the non-USA name) for sandal blisters, and probably too much unwanted advice. It's a merry mix until near sunrise, when those who came to do some of the world's finest rock climbing start by climbing out of bed. Due in part to a sprained thumb, and some world class apathy, my own climbing is only into and out of the hammock which finally gets some glorious use, on the beach in an overhanging rock directly below some climbers on a 6 route.