There are many reasons why I should try to put one more post out there, before google reader shuts down. But more interesting perhaps, is the reason I shouldn't. The blog goes quiet when I'm stable in one location, because the blog has a way of altering life, not just documenting it. This isn't anonymous, so that isn't really surprising. But it is part of the calculus. When I'm traveling, tomorrow's life is disconnected from today's, so the effect is minimized. And so now, as I'm about to depart, it's worthwhile to ... 'splain.

When we last saw Mike, it was -45 degrees (Celsius and Farenheit agree) and he was in Harbin. Not the nudist hot spring commune in California, but the Bangor, Maine of China, during their Ice and Snow festival (awesome pics). From there I skiied into Korea, and re-met some old friends Hong, Dong, and Nicole. She and I have maintained a long distance relationship since then, but by June she'll be moving here to join the NHGRI Myung Lab doing RNASeq studies of genome instability.

During that time, I've settled into a nice little routine. I still work for KeyGene and now live just a minute walk from their Rockville, Maryland office. We're a small office, but it's given me a nice opportunity to steer us into the cloud and do some interesting science. The best evidence of that is being one of the coauthors on the Tomato Genome paper, but as usual in corporate ... (hmm I was going to say Corporate America, but I guess that doesn't apply with my Dutch employer) ... science, interesting work is not always visible from the outside.

Most evenings I'm tapping away at SNPedia and Promethease. These are my long term side projects to help people understand what is in their DNA. $99 + some spit = a surprisingly detailed, but far from perfect, look inside you. We got a nice mention in the New York Times a few weeks ago, and it continues to be a interesting hobby for me.

On Thursday I'll return to the Netherlands for 3.5 weeks. The timing allows me to enjoy my birthday with some wonderful friends who I've not seen in almost 18 months. At the same time, I'll catch Liberation Day in my old home, the transition to a new monarch during Koninginnedag, and Keukenhof in full bloom. I split my time between the old home of Wageningen, and the client site at Enkhuizen. First and foremost, this is a work trip, but I think it promises to be a very enjoyable one.

At the end of this year, I'll again go traveling for a few months. I expect to begin in Kosovo, and then back to teach computers at at Kaw Tha Blay.


So now, with the universe happily under control and some quiet before my departure, I've stopped to pause and reflect, and catch up with you, my few dear readers. People who take 10 minutes from their own lives to wonder about mine.


Before I left the Netherlands, I recall Saskia asking me, why? Was it something I missed about America, or perhaps something I disliked about the Netherlands. I did miss some of the convenience of America. Which is not to say it is so convenient for everyone, but it does treat me kindly. Unquestionably, the Netherlands does a better job of treating everyone one that well. But for me, I did miss the convenience and it was a factor. What I wanted was not the destination of America, but the everything in between even with its substantial inconveniences. 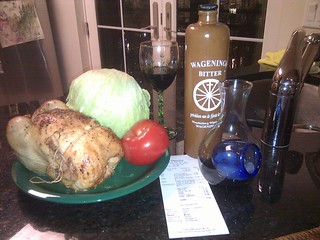 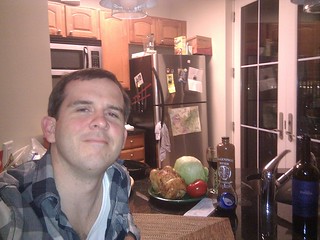 It's a Tuesday night. That means 'cheap chicken' tuesday at Dawson's Market. The locally sourced organic friendly don't-call-us-super market across the square. For $5.99 I get a whole roasted chicken, really nicely done. Returning 2 milk bottles, bringing my own bag, and walking gets me some store credit, so I leave with a head of lettuce and a very ripe tomato for $6.66. I've enjoyed it with some wine, and a few sips of Wageningse Bitters. This is similar to Jaegermeister, but easier and more pleasant. It is served in a clever Japanese sake bottle, with a pocket that keeps the melting ice water separate from the liquor. My laundry is tumbling, and I've switched to these little premeasured packets of soap you toss into the machine. Those didn't exist when I last lived here. For my dishwasher they defintely improved the results. This is very convenient. Time for Daily Show and Colbert. Life is grand. Tot ziens.
Collapse